"Um, are you taking us to NeverLand or not?"
—Wendy to an exhausted Peter Pan[src]

Wendy Darling is a character on Smosh based on the Disney character of the same name. She is played by Courtney Miller.

Wendy is the deuteragonist of the main characters of the 1953 Disney animated film Peter Pan, which in turn is based on the works by Scottish novelist and playwright J. M. Barrie in the form of the 1904 play Peter Pan; or, the Boy Who Wouldn't Grow Up and the 1911 book Peter and Wendy. In the film, she is voiced by English actor and singer Kathryn Beaumont.

Wendy is a young girl from Edwardian London with a veneration of the stories of Peter Pan and the older sister of John and Michael Darling. One night, her dream of staying young forever (one reason for her love of the Peter Pan fairytales) was nearly realized when she and her brothers went on an adventure to NeverLand with Peter Pan himself.[1]

In the scene parodying Peter Pan as "Peter Pant", John and Wendy stand before Peter Pan, who is bending over, trying to catch his breath. Wendy inquires if they are going to NeverLand or not, so Peter tells her to hang on. John bluntly asks Peter why he is not wearing any pants. Between gasps for air, Peter manages to get out that he was too tired to put any on before crumpling to the ground in exhaustion, to the Darling siblings' confusion.

Wendy in Peter Pan (1953), which the character is based on 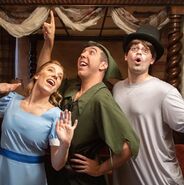 Retrieved from "https://smosh.fandom.com/wiki/Wendy_Darling?oldid=177917"
Community content is available under CC-BY-SA unless otherwise noted.