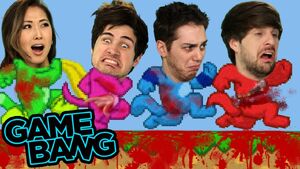 WE SLAUGHTER HELPLESS CRITTERS is the seventy-ninth installment of the Smosh Games series Smosh Game Bang.

The players all have one of their stuffed toys with them, and the three losers have their toys torn apart by the three winners.

Retrieved from "https://smosh.fandom.com/wiki/WE_SLAUGHTER_HELPLESS_CRITTERS?oldid=173648"
Community content is available under CC-BY-SA unless otherwise noted.