WE ARE NOT THE DEADLIEST WARRIORS 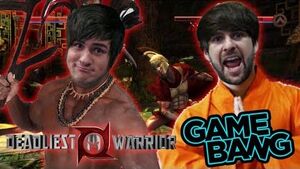 WE ARE NOT THE DEADLIEST WARRIORS is the forty-ninth installment in the Smosh Games series Smosh Game Bang.

The Smosh Games crew have yet another fight to the death playing Deadliest Warriors.