Charlie the Drunk Guinea Pig as himself

The following never-before-seen clips were removed from the theatrical release of Twilight: New Moon due to their unsuitable nature.

Bella is leaning on Edward's shoulder when she says there's something that she's been meaning to ask him. Edward asks what so Bella asks her question: "Do you poop?"

Edward arrives at Bella's house, and she tells him that she's going to get the hot tub warmed up. As Edward starts to follow Bella, Chris Hansen comes out of the fridge and asks Edward to take a seat. Chris says that he's with Dateline NBC and they're doing a show about adults who like to prey on small children. When asked how old Bella is, Edward says that she's in her 30s, but Chris has a data of their chats that says that she's 17 and asks how old Edward is. Edward answers, "13."

Bella says that Edward doesn't poop because all he eats is blood. Edward, annoyed by her completely irrelevant question, replies with, "No, I don't poop!" Bella says that it doesn't make any sense before holding up the book Everyone Poops before saying that everyone poops.

Bella enters Edward's house and hears music. In another room, Edward is trying on a blue dress. Bella walks in and shouts, "Edward!?" Edward screams, "This is my first time doing this, I swear!" before leaving.

Chris Hansen says that Edward's screen name is sweatymannipples1993, in which Edward admits is true. Chris also points out that it says in their online chats that he would want to "(beep) her in the (beep)." Edward was going to say that it was a joke, but Chris says that he went on to say "then ha(beep) chilli on (beep) dia(beep) and give her ha(beep) bun in﻿ (beep) mother(beep)ing co(beep) s(beep)ing mother(bleeeeep) just like in The Shining." Edward says that he never said any of that, but Chris admits that he made the last one up, but the rest is Edward. He tells Edward is free to go, but Edward asks, "So, can I still f*** that girl?" Chris replies, "Sure. Go ahead."

The following never-before-seen clips were removed from the theatrical release of Twilight: New Moon due to their unsuitable nature and complete lack of cohesiveness.

Jacob talks to a depressed Bella, who heard that Edward has moved to Italy. Jacob feels bad for her but then asks if she wants to make out. Bella asks, "What?" and Jacob says, "Nothing." Bella says she thought that Jacob wanted to make out with her, which Jacob said would be gross. However, Bella said that she would have, causing Jacob to jump up and down in frustration.

In an episode of My Super Sweet 116, Edward is trying on outfits for his Sweet 116th birthday, hoping for it to be the best birthday ever. Edward is with a stereotypically gay party planner named Fabian who asks him what he wants to do for his party. Edward says he wants a vanilla cake, live bats flying in, the whole house painted black and to ride in on a pink elephant. Fabian says that he probably couldn't get a pink elephant, so he asks for a pig.

Edward passes by a Jamaican Guy, who starts to ask what happens when he goes into the sun. He starts to annoy Edward by constantly asking of possible things that would happen until Edward answers, "I get all glittery, okay!?" The Jamaican Guy says, "Chill out, bro!"

Edward's party has started, and all his friends have arrived, so tensions were high for him. When handed a plate of chocolate cake, Edward angrily yells, "I asked for vanilla cake!" and smears it on his dad. Edward throws a fit on how it's the worst birthday ever.

Bella enters Edward's house and hears music. In another room, Edward is dancing to Beyonce's "Single Ladies." Bella walks in and shouts, "Edward!?" Edward screams, "This is my first time doing this, I swear!" before leaving.

The Jamaican guy continues to eat his dreadlocks.

Edward's dad tries to apologize to Edward and says that he has a surprise for him. Edward says, "It better be a pink elephant." Outside, they reveal that Edward's dad bought him a silver car, in which Edward responds with an angry voice, "You...got me...a silver car?! I love it!"

The following never-before-seen clips were removed from the theatrical release of Twilight: New Moon because they were just plain stupid. You'll see what I mean.

Edward has set up all the parts for the game Mouse Trap, with the contraption doing its usual job until it stops short. Edward shouts "F***!" while pounding the bed, causing the contraption to resume. 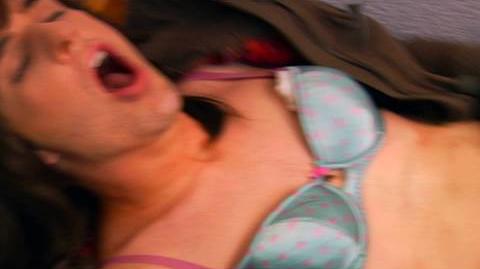 In an episode of The Dating Game Mythological Creature Edition, Bella has to choose between three bachelors: Jacob, Dave the Elf, or Charlie the Drunk Guinea Pig. Bella asks Bachelor #1 (Jacob), "If we were to go out on a first date, what would we do first?" Jacob would arrive at his house, give Bella a rose, but the rest isn't heard because Bella thought it was boring. Bella asks Bachelor #3 (Charlie) the same question. Charlie's answer is barely intelligible, but he says, "grab a boob," which makes Bella think he's a "spontaneous man." Bella asks Bachelor #2 (Dave), "A famous man once said, 'All things appear and disappear because of a concurrence of causes and conditions. Nothing ever exists entirely alone. Everything is in relation to everything else.' Who was the man who said this?" Dave looks confused.

Bella enters Edward's house and hears music. In another room, Edward was doing something suggestive behind a censored box. Bella walks in and shouts, "Edward!" Edward asks, "What? You act like you've never done this before?" before continuing.

Bella asks Jacob, "My old boyfriend took me places by putting me on his back and running at Supersonic speed. How would you take me places?" Jacob says that he'd turn into a wolf and would let Bella ride on his back, but would be naked once he turns back, causing Bella to call him a pervert and tells him to “have some class.” When Charlie is asked the same question, he answers, "I don’t take you places, you will take me places." Bella calls him an alpha male before asking Dave to spell the word "Cat." Dave spells it correctly, but Bells says that he could've done better. Dave upon hearing this is shocking and confusing.

Bella was calling Edward over the phone when a bat flies in. She hurts the bat until realizing that it could be Edward in bat form. He then tells Edward to marry her and make love to her, all while a song called Vampire Lovin' by Barry White is playing. The real Edward walks in and asks "What the f**k!?", causing Bella to stop. Jacob, looking through the window with a video camera, says, "I thought it was pretty cool."