The Little Mermaid SNAPPED | One Letter Off Disney Movies

The Little Mermaid SNAPPED, originally titled One Letter Off Disney Movies, is the 8th episode of the Smosh series One Letter Off. It was released on November 4, 2019.

How different would your favorite Disney movies be if they were just one letter off?

Mufasa (Keith Leak Jr.) sits with Simba (Olivia Sui) and talks to him how everything the light touches marks their kingdom. He adds that hyenas are hated amongst lions. Simba asks why, and Mufasa turns to the camera and remarks that "it's a lion ting".

Ariel (Courtney Miller) hums to herself as she combs her hair with a dinglehopper before raising it as the camera pans down to reveal Flounder on a plate. Ariel proceeds to repeatedly stab the dead fish over and over.

The video backs out of this idea, instead showing a black screen with white text reading "Yeah sorry no" before skipping to the next one.

Merida (Christina Lopez) and her mother (in bear form) drunkenly dance at a Scottish rave, with the lights off, music blasting, and lights flaring.

A breaking news report on CFM details the "great toy massacre", in which another toy store has gone out of business because of online retailers and have opted to toss out their remaining toys instead of donating them. Reportedly, the toys come to life and make form friendships through action-packed adventures. In other news, the news anchor (Olivia) continues, puppies are cute!

A Scottish Aladdin (Damien Haas) tells Jasmine (Kimmy Jimenez) that he would show her the world, but is not sure what she is "aluddin'" to.

One jar proclaims that he is full of pickles. Another states that they have olives. The third and final jar introduces himself with "I'm Mater... sauce. Tomater sauce."

As Snow White (Olivia) slowly sweeps the floor of the dwarves' cottage, the Evil Queen (Courtney) appears in the window in hag form and offers her an apple. Snow White slowly sets her broom against the wall and slowly makes her way to the window. As she stops for a moment to wipe a shelf in slow motion, the hag asks her to pick up the pace. The Queen, getting impatient, demands that she eats the apple, which piques Snow's interest and she asks what type of apple. The Queen hesitates before saying "apple kind", but Snow ponders if it is Red Delicious, Fuji, Gala, or even a Honeycrisp. Eventually, the Queen gives up and leaves as Snow innocently bids her goodbye.

Mark Poppins (Matthew Scott Montgomery) picks up the trash in the Banks' home as Jane and Michael Banks sit on the couch in front of him with absolutely terrified expressions on their faces. Marks offers to show the kids the "coolest stuff" in his bag, which the Banks children refuse in terror. Mark starts to step forward while offering "tasty cane dust", advertising it as the "crumbs of angels". At this, Jane and Michael scream and run away, leaving Mark wondering why children always think he wants to kill them.

The Scottish Aladdin from before judges Mulan (Olivia) fit to fight in the war, to her relief.

Continuing a documentary of the life cycle of a bag...

Wendy Darling (Courtney) asks a visibly exhausted Peter Pan (Matthew) if he is taking her and her brother John to NeverLand or not. Peter tells them to wait a moment as he tries to catch his breath. John bluntly asks why Peter is also not wearing any pants. Peter, between gasps of air, explains that he was too tired to put any on before collapsing to the ground, groaning. The Darling siblings only look at each other in confusion.

Miguel Rivera (Kimmy) holds his grandfather's guitar in amazement as two drug cartel members (Matthew and Keith) order him to take the guitar to their colleagues on the other side of the border. One tells him not to look inside, and the other reveals that it is filled with cocaine (which the first cartel member scolds him for). The other cartel member lifts his sunglasses and threatens that, should Miguel tell anyone about this, he will kill his entire (family, presumably), but he is interrupted by ghostly guitar music. The cartel member tries a few more times, but without success, and gives up and leaves, but not before reminding Miguel of the order.

Two monk bros in zen, Damien and Shayne, sit together in meditation. Damien expresses a want to party and a concurrent want to chill. Shayne, sympathetic, expresses a similar desire to get wasted on green tea. The two fist bump before continuing their meditation.

Damien and Shayne exchange "I froken' love you, bro" while they continue their meditation, finishing with a fist bump handshake.

Ralph's friends (Ian, Courtney, and Shayne) visit the morgue to see Ralph's body. Ralph, as the morgue attendant (Olivia) explains, was driving under the influence of drugs and alcohol. Almost as if they were in a scripted notice, his friends express stock regret and sympathy as they wish they could have done differently to help Ralph before he died. The notice ends with a warning reading "D.K.R.E. / Drinking Kills Ralph Everytime".

The previous thumbnail, featuring Olivia and Matthew as Snow White and Peter Pan 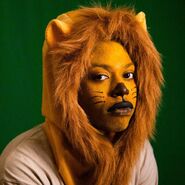 A preview of Keith as Mufasa[1] 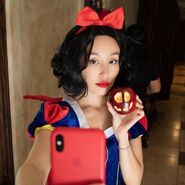 A preview of Olivia as Snow White[2] 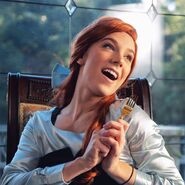 A preview of Courtney as Ariel[3] 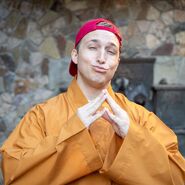 A preview of Shayne as a Zen Bro[4] 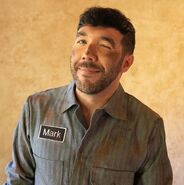 A preview of Matthew as Mary/Mark Poppins[6] 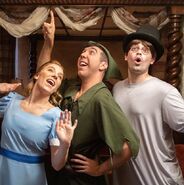