Thanos is a character based on the supervillain of the same name. He was introduced in 2019 and played by Damien Haas.

Thanos, played by Josh Brolin in the Marvel Cinematic Universe, is a warlord who first appeared in The Invincible Iron Man #55. Born on the planet Titan, he watched as his planet was on the brink of collapse and was rejected when he proposed the genocide of half the planet's population at random. When Titan civilization indeed collapsed, he and his followers searched for the Infinity Stones (Power, Mind, Space, Soul, Time, and Reality). The Infinity Stones allow him total power of the universe. In the comics, he used this to kill half the population of the universe to impress Death (a female personification of death). In the films, Thanos did this to make the universe more balanced out and to prevent overpopulation and resource overconsumption.

Thanos approaches his coworker Kia in the office while she and another office worker played by Keith Leak Jr. are working on something. Thanos walks in and asks her if she parked in his space again, which she confirms and nonchalantly tells him to park elsewhere. Thanos, angered, threatens to snap and, when Kia doubts so, does just that. Their coworker gasps and argues that he should be spared because he sent Thanos a Christmas card before disintegrating. Thanos ominously tells Kia that she wins this time.

During the bloopers, Thanos and Kia have another lengthy back-and-forth.

Thanos' scene in the video 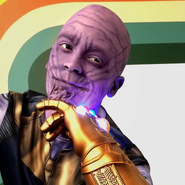 A preview of Damien as Thanos on his Instagram
Add a photo to this gallery
Retrieved from "https://smosh.fandom.com/wiki/Thanos?oldid=170734"
Community content is available under CC-BY-SA unless otherwise noted.