Smosh Wiki
Register
Don't have an account?
Sign In
Advertisement
in: Characters, Protagonists, Shut Up! Cartoons Characters,
and 3 more

Robert "Robbie" Lee Phillips, Jr., also known as the Teleporting Fat Guy, is a heavy-set man with a muscle shirt, and a Nintendo Power Glove that can teleport him to anywhere and to any date. In a deleted video he loses weight.

The Teleporting Fat Guy is heavy-set and wears a wife beater, blue athletic shorts, necklaces and Converse tennis shoes, as well as his trademark Nintendo Power Glove. In Anthony's Resurrection, he looks normal except his right eye is covered by an eyepatch and he carries a cane.

The power glove has a variety of certain teleportation powers:

The Teleporting Fat Guy appears to be on good terms with Anthony and Ian, allowing them to teleport with him in The Future Sucks! However, thirty years in the future, in Anthony's Resurrection, he is less friendly towards them, refusing to allow them to teleport to the past after they refuse to kill Burt Reynolds. This results in both punching him in the face to steal his power glove. In The Future Sucks, he is shown to be friendly around Ian and Anthony.

Robbie Phillips is Robbie's dad. Bart Reynolds reduced him to ashes and Robbie believed he was dead, swearing revenge. However, Robbie Lee Phillips Sr. is alive and his shape was merely changed to a pile of ashes. Robbie keeps him in a jar and carries him around everywhere.

Rachel is Robbie's love interest. When Bart Reynolds took the Power Glove, he also kidnapped Rachel in case Robbie became a time traveler. Robbie's biggest fear apparently is when other people date Rachel, especially Bart Reynolds. A running gag is that every time Bart Reynolds tells Robbie about what's going to happen to his "girlfriend," Robbie reminds him that Rachel is not his girlfriend, at least not at the moment. 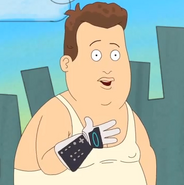