The Smosh Squad was the group nickname of the five regular Smosh cast members, sometimes including Ian. They had their own side series, Squad Vlogs, which aired on Smosh Pit on Thursdays. Since the acquisition of Smosh by Mythical Entertainment, both the Squad Vlog and the Smosh Games Crew ceased to exist and they became collectively known as the Smosh Family. 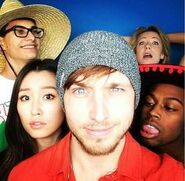