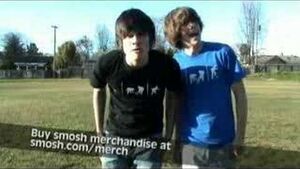 Smosh Merch Commercial is the second video uploaded on the IanH channel (now called Smosh Pit). It was uploaded on March 21, 2006.

It's the first ever commercial for Smosh stuff (shirts in that case). Entire video is made in stop-motion. Ian (with probably Anthony beat-boxing) creates the background music while Anthony speaks:

Limited Smosh shirts now available!
Guaranteed to raise your sexiness by 60%.
(with quieter voice) Sexiness not guaranteed for ugly.