It was first announced in Smosh is Bored, Episode 237 Accent Challenge #2 that Smosh was almost ten years old and that there was going to be a week of special videos coming up soon, one of those including fans of Smosh. Fans uploaded videos on how Smosh has touched them over the years to social media, (Facebook, Twitter and YouTube), with #smosh10.

Later on the Food Battle X Trailer, Smosh said that the whole week of November 16 to 20, 2015 is the 10th anniversary of Smosh. During the 10th Anniversary week, celebrities & YouTubers are invited to celebrate this event, including recurring Smosh cast members & Smosh Games joining together (in Every Smosh Video Ever). There will be a new video made every weekday, all the way up to Food Battle X.

Smosh's header for the week 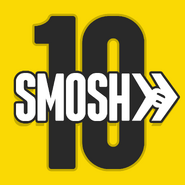 Smosh's profile picture for the week