Smosh.com is the Smosh database, where people can view all Smosh episodes, exclusive content from videos, and private videos that were never uploaded onto YouTube. The website is used to sell various types of Smosh merchandise, currently through the Smosh Store.

How it was made

Most people say that the coding used resembled how Adobe Dreamweaver used to make their website. Anthony made the website so his group of friends could chat on there as back then, there wasn't a really good social media website. Later the website got popular, so Anthony decided to put some ads on the website to make some money.

Smosh.com first started in November 2002 as a basic flash movie and social networking website created by Anthony so that he and his friends could chat as said in an interview with PartnersProject. The selections were in blue ovals. The "Extras" videos section was separated from the normal "Videos" section. The website also included a forum and a store. There were no games at the time, though.

The website design changed a lot. It now had its layout to be on cardboard, much like the Shut Up! opening. A "Games" section was also added, the "Extras" section was added in the "Videos" section, and a new feature called Smosh Pit was also added to the website. During this time, both the forum and the store were still active.

On January 22 and 23, 2013, around the time of That Damn Movie!, Smosh.com was given a complete website re-design. The URL is still the same (Smosh.com) but the cardboard theme was dropped for a more simple clean layout. A new area self-titled Shut Up! Cartoons and Smosh Games were added to the new website. The forum and store were still part of the website. After a week, they changed the background to the Cardboard layout but everything else stayed. On March 26, this version was restored. In 2015, a Music page was added. A small box was also added where fans could choose to look at, "Music", "Shop" or "App" quickly.

In 2018 the website was heavily redesigned. The previous design was scrapped in place for a new, simpler looking website with a plain white background and light blue text. Most sections including Smosh Pit were removed. The website now only contains the sections "Videos", "Articles", "About" and "Store".

On November 6, 2018, after the shutdown of Smosh's parent company Defy Media the website was disabled. Four days later on November 10, the website was reactivated though it was unused until February 19, 2019 when a video titled Something's Coming... was uploaded and the video was embedded on the website. It had a countdown when a particular event, which turned out to be an announcement video that Rhett & Link have bought Smosh as one of their divisions, was activated.

On February 23, 2019, the website had a change once again. An embedded video, The rumors are true... has replaced Something's Coming..., the countdown has been replaced by a SmoshCast video and a link to the store for their current merchandise, a shirt with a phrase "I helped" being shown. 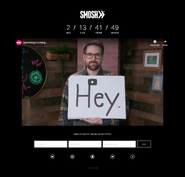 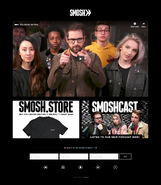