Shayne Topp is the eponymously-named personal channel of Shayne Topp, created on July 14, 2015 under the name SmoshShayne. The channel only has two uploads, both of which are Vine compilations from 2015.

Prior to Defy Media closing down, almost all the Smosh Squad members had a branded personal channel featuring their names coupled with "Smosh" and a recurring artwork theme for the banners and icons. After this, however, Shayne chose to change his channel avatar (but left the banner alone) and removed the "Smosh" from its name, becoming simply "Shayne Topp". 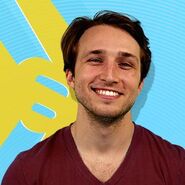 Previous avatar
Add a photo to this gallery
Retrieved from "https://smosh.fandom.com/wiki/Shayne_Topp_(channel)?oldid=176726"
Community content is available under CC-BY-SA unless otherwise noted.