Surprising Shayne with a Graduation Ceremony (he cries)

Sarah Whittle
Sarah E. Whittle (born February 7, 1989) is the former Director of Unscripted Content for Smosh. Originally being hired as an Assistant to a Producer, she worked her way up to produce and direct for more shows on Smosh Pit, eventually becoming a member of Senior Staff, directing content across both Pit and Games. She has recently directed sketches on Smosh Main, such as Every Panda Express Ever, Every Dunkin Donuts Ever, and First Hookup After Quarantine. Sarah was also the brains behind Spelling Bee-Kini Wax, which she has also been the host of. She regularly appears in videos for Smosh Games and Smosh Pit, appearing as a guest on The Show w/ No Name! in the episode PUTTING KIMCHI IN OUR MOUTHS! (The Show w/ No Name), and notably served as one of the referees for Smosh Winter Games: Again! and Smosh Summer Games: We Blew It. She has appeared in many, many other videos since.

In November 2018, it was confirmed that Sarah had temporarily left Smosh to move on to other projects, though she was still appearing in videos for the brand. In February 2019, she revealed on Instagram that she had returned to Smosh, and has continued to work as a producer and social media manager from then onwards. Since her return, she has made more frequent video appearances, including participation in Gaming With A Twist and a few appearances on SmoshCast, as well as serving as a referee for Smosh Summer Games: Apocalypse. All while managing to run the Smosh Facebook and single handedly helping the brand grow rapidly on that platform. On May 3, 2021, it was officially confirmed on the SmoshCast that Sarah was officially leaving Smosh.

Sarah was born in Cheyenne, Wyoming to a Korean mother and a father who was in the United States Air Force and moved around numerous times in her childhood. By age 7, she had already lived in Wyoming, South Korea, North Dakota and Germany.[2] From age 6-12, she attended Bitburg Middle School in Germany,[3], where she hosted her own show on the school's channel. In 2001 she moved back to Wyoming, where she attended Cheyenne East High School[4] and Laramie County Community College, where she was president of the theater club and the Speech and Debate team.[5][6] She graduated in 2009,[7] earning an associate’s degree in speech communication. She also attended Hofstra University in New York, where she graduated with a bachelor's degree in TV production in 2011.[5]

Sarah found jobs at NYC Media and Hillside Media before moving to Phoenix, Arizona, where she worked as a "national segment producer" and reporter for a new series broadcasted by the E. W. Scripps Company, The List, and wrote, edited, and produced over 400 segments about "today's news, viral videos and everything trending." She eventually moved to Los Angeles, finding work at Game Show Network, OK! TV, Clevver, and Smosh (until 2021). 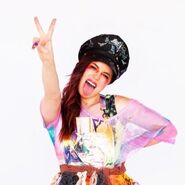 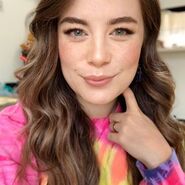 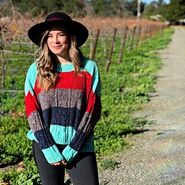