Samuel Brent Oscar "Sam" Riegel (born October 9, 1976) is an American voice actor, writer, and director with credits in cartoons, anime, and games, as well as a cast member on the Dungeons & Dragons web show Critical Role. He appeared alongside fellow Critical Role cast member Matthew Mercer on a 2019 episode of Gaming With A Twist.

Sam Riegel is an American voice actor, writer, and director who has been involved in cartoons, anime, and video games. Notable roles include Donatello in the 2003 Teenage Mutant Ninja Turtles animated series, Phoenix Wright in the Ace Attorney games, Shiro Emiya in the Fate/stay night visual novel series, Taniguchi in The Melancholy of Haruhi Suzumiya, Mephisto Pheles in the Blue Exorcist series, Lil' Slugger in Paranoia Agent, and Peter Parker in the video game adaptations of The Amazing Spider-Man (2012) and The Amazing Spider-Man 2 (2014).

Sam is also a cast member of the online web series Critical Role, a series in which he and his voice actor friends play Dungeons & Dragons. In the series' first campaign, Sam played the gnome bard Scanlan Shorthalt and the human artificer Taryon Darrington. In the second and current campaign, he plays the goblin rogue Nott the Brave.

Outside of voice acting and roleplaying, Sam hosts the podcast All Work No Play with fellow voice actor and Critical Role cast member Liam O'Brien. He lives in Los Angeles with his wife, cinematographer Quyen Tran, with their two children, one of whom is also a voice actor. In 2018, Riegel received the Daytime Emmy Award for Outstanding Directing in an Animated Program for his work on the animated series Danger & Eggs.[1] 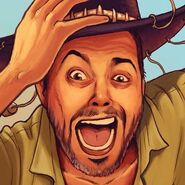 Sam's Twitter avatar
Add a photo to this gallery

Retrieved from "https://smosh.fandom.com/wiki/Sam_Riegel?oldid=181353"
Community content is available under CC-BY-SA unless otherwise noted.