Smosh Wiki
Register
Don't have an account?
Sign In
Advertisement
in: Cleanup from early November of 2018, Articles requiring cleanup, Smosh,
and 4 more

Unavailable
watch 03:36
Wiki Targeted (Entertainment)
Do you like this video?
Play Sound
This article may require cleanup to meet Smosh Wiki's quality standards.
Please discuss this issue on the talk page. This article has been tagged since early November of 2018.

The End of Christmas (Part 1)

Ian and Anthony think they totally know how to deal with zombies!

In the house, Ian throws a Luigi doll in the air while lying down and Anthony eats canned peas while watching the news reporter. The reporter, Namoi Doogleefifi, says that a emo hair loser and bowl hair reject (referring to Anthony and Ian) managed to get many views on their stupid videos (referring to the Smosh channel) in the house she's standing out of. However, she got eaten by a zombie that ran towards her. Another zombie broke the camera with the interruption saying, "Sorry for the interruption, zombie outbreak is occurring". Anthony was upset because he wanted to make fun of the haired losers, not knowing it was them. All of the sudden, the doorbell rang. Ian and Anthony got up answering the door while Anthony says that they don't want any Boy Scout Crackers before he opened the door, but when he did, he found that zombies had rung the doorbell which they wanted to come in along with the reporter which she's a zombie. Ian and Anthony felt scared and closed the door. Ian wanted to know how they can protect themselves. Anthony doesn't know and decides to pick up a book called Suriving Zombies for Dummies. He tried to read, but Ian wanted to skip towards the pictures which Anthony didn't see any. Ian doesn't like the book because it doesn't have pictures while thinking all books do. After a knock at the window, Anthony told the zombie to wait while thinking they don't have any patience. Ian thought of doing what happened in The Walking Dead. Anthony starts thinking about the show knowing they sit in a bar for the entire season while searching for a completely useless character. Ian noticed that not wanting to hear, "Sophia," again or he'll shoot himself. Anthony was wondering about Ian having a gun with him which Ian said that was correct ever since he stole it from Stevie's zombie survival kit. Ian also thought Stevie's probably dead now.

Outside on the driveway, Stevie backs away from the zombies trying to get his gun from his survival kit. However, he found a note from Ian that he owes Stevie a gun. Stevie didn't like it while being grabbed by the zombies.

Back in the house, Anthony takes the gun away from Ian and opens the door. He tells the zombies to not lose their heads. As soon as Anthony tried to shoot them, they were still undead which made Anthony close the door. Ian noticed he missed every single one which Anthony thought it was harder than it looked in the show. Ian tries to show Anthony how to do it. As soon as Ian tried to shoot them, Anthony noticed Ian missed every shot also. Ian noticed that he got one of the zombie's pointer finger. Anthony closed the door while telling Ian that he didn't kill any of the zombies but Ian thought Anthony didn't understood the point. They both laughed at the joke, but Anthony didn't want to be in focus of it. While the zombies were knocking, Anthony thought of getting the car and they both head towards the garage.

By the door leading to the laundry room, two zombies were in the room while carrying some clothes. Ian and Anthony closed the door, but Ian wondered if the zombies were doing their laundry. Anthony complain to the zombies about using his fabric softener knowing he has five of them left and asked Ian if he had any ideas of his own.

By the front door, Ian got a treadmill and it in front of opening. Anthony thought it was stupid, but the first zombie to enter through the door was on the treadmill not getting off. Ian thought it was the best invention by human kind, but another went around it; Anthony thought they were learning. Ian wanted another treadmill which Anthony said he'll go down the basement to get emergency treadmills. Ian wondered if they have that, but Anthony was being sarcastic knowing they don't even have a basement. When the other zombies came in, they tried to run away.

In the living room, Anthony asks Ian while yelling about what they're gonna do. Ian slaps Anthony and tells him that they maybe misunderstood. He also thought that they have dreams to achieve unlike his dream about him touching Jessica Alba's left boob. Anthony asked why Ian was being weird which Ian didn't understand telling Anthony he's a normal human being. Anthony thinks about the fact the words, "human being," sounds like, "bean", beans are legumes, the word, "legumes," has the word "legs," in it, Ian's mom has nice legs in his opinion, and her age making her practically dead now thinking of one thing. Anthony told Ian he's becoming a zombie. Ian said that he wouldn't have gotten away from if it wasn't for meddling kids; Anthony knew there weren't any kids in the house. Ian thought that's what people always say when caught. Anthony asked when Ian was infected which Ian said it was five minutes ago.

Five minutes ago, Ian grabbed one the zombie's arm and bit on it while Anthony were holding the door.

Back in the present, Ian told Anthony that he got hungry, but Anthony apologized while saying he still has to shoot Ian. Ian wondered where Anthony got the rifle, which Anthony said he stole from Stevie's backup zombie survival kit.

Outside on the driveway, Stevie was drag by the zombies while he tries to get a rifle from his backup survival kit. However, he found a note from Anthony that he took Stevie's gun. Stevie didn't like the message and was about to be turned into a zombie.

Back in the house when Anthony was about to shoot Ian, Ian told Anthony that they can become best friends forever. Anthony didn't know what Ian was talking about at first, but then noticed.

After Ian was making a joke about, the point, they laughed for at least a few more seconds getting the joke but then Anthony said, "Not!"

Anthony Padilla as Himself

Ian Hecox as Himself

Maegan Jones as the Reporter 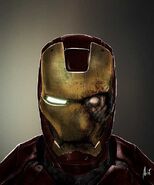 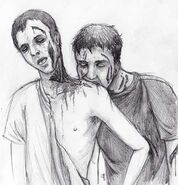 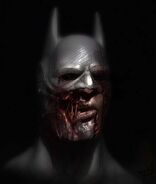 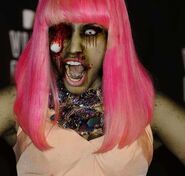 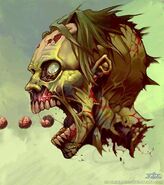 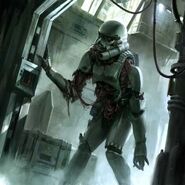 Ian: And I want Jessica Alba's left boooooob! I mean, what?"