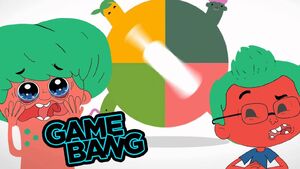 It was uploaded on November 22, 2013 on both smosh.com and YouTube.

Winner (or winners) gets to shoot a one of the losers with a toy water squirt gun by a spin of a bottle.

Note: If the results had been based on the amount of successes, Lasercorn would have won with 4 successes, Ian, Mari and Joven would be joint second with 3, Anthony would be 5th with 2 and Sohinki would have lost with only 1. Mari won because the player who helps the person win the final game wins as well.