nigahiga
Ryan Higa (born June 6, 1990) is a Japanese-American comedian originally from Hilo, Hawaii. He is most known as the prime creator of the YouTube channel, nigahiga, which is currently the twenty-fourth most subscribed on YouTube.

Due to Ryan and the Smosh duo both being original "famous" YouTubers and YouTube sketch comedians around the same age, having even lived close to each other before, they are good friends who meet up with each other every once in a while.

He appeared twice on the main Smosh channel in 2010, in the episodes "If Cartoons Were Real" as a confused school student and "Pokemon Theme Song REVENGE" as the boss of a group of ninjas sent by The Pokémon Company to kill Anthony and Ian for making another Pokémon-related video. He has also appeared in an episode of Ian is Bored. In the episode, "Kicking NigaHiga's Butt!" Ian and Higa face off in a wrestling match with Ryan winning due to him being a trained High School professional wrestler compared to Hecox who had no prior training.

Higa voiced himself in the Smosh Babies episode, The Swimming Lesson.

Ryan Higa is then played by Anthony Padilla in HOW TO BE A YOUTUBE COMMENTER where he is annoyed by Old Man Grandpa due to him being in his room. Shortly after being disturbed, Old Man Grandpa accuses him of being in the Illuminati.

In 2015, a year later, Ian and Anthony is featured in one of Ryan Higa's "I Dare You" videos, the same month in May, taking part in his "Thank You Mom" video featuring Ryan, hd fans, and other YouTubers thanking their mother's presence. Later that year, he would appear in EVERY SMOSH VIDEO EVER along with his childhood friend and half of the former "nigahiga duo", Sean Fujiyoshi humorously imitating Smosh's Food Battle Series.

In March 2017, Ryan's Higa's likeness is featured in the form of a cardboard cutout in WE'RE STUCK IN FAN FICTION!

He finally appears in the video THE VLOG VIRUS (w/ Ryan Higa and Rhett & Link) alongside Rhett and Link.

On December 19, 2017, Noah and Courtney reacted to Ryan Higa's "How To Get Views On YouTube" video in the Fine Brothers' YouTubers React series.

On March 3rd 2019, Ian appeared in episode 6 of Off The Pill podcast by Ryan Higa.

Ryan Higa in THE END OF CHRISTMAS 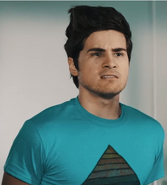