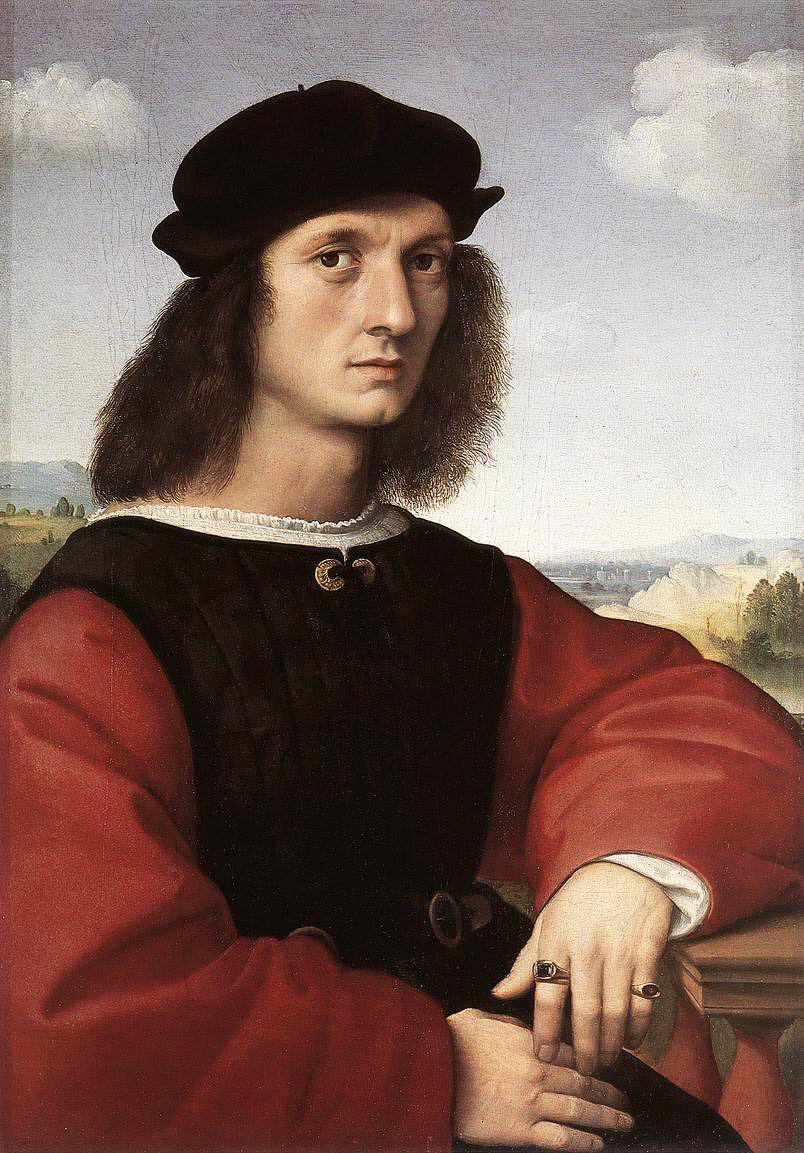 "(Yo!) Raphael, and I came to flow! Deemed dope by the Pope and I boned 'til I croaked!"
—Raphael summing up his life.[src]

Raphael Sanzio da Urbino is a character portrayed by Anthony Padilla in Artists vs TMNT, the Season 3 finale of Epic Rap Battles of History. He battle rapped alongside Michelangelo Buonarotti, Leonardo da Vinci, and Donatello Bardi as part of the Renaissance Artists against the Teenage Mutant Ninja Turtles of the same names.

Raffaello Sanzio da Urbino (April 6, 1483 – April 6, 1520), known as Raphael, was an Italian painter and architect of the High Renaissance. His work is admired for its clarity of form, ease of composition, and visual achievement of the Neoplatonic ideal of human grandeur. Together with Michelangelo and Leonardo da Vinci, he forms the traditional trinity of great masters of that period.

Raphael was enormously productive, running an unusually large workshop and, despite his death at 37, leaving a large body of work. Many of his works are found in the Vatican Palace, where the frescoed Raphael Rooms were the central, and the largest, work of his career. The best-known work is The School of Athens in the Vatican Stanza della Segnatura. After his early years in Rome, much of his work was executed by his workshop from his drawings, with considerable loss of quality. He was extremely influential in his lifetime, though outside Rome his work was mostly known from his collaborative printmaking.

After his death, the influence of his great rival Michelangelo was more widespread until the 18th and 19th centuries, when Raphael's more serene and harmonious qualities were again regarded as the highest models. His career falls naturally into three phases and three styles, first described by Giorgio Vasari: his early years in Umbria, then a period of about four years (1504–1508) absorbing the artistic traditions of Florence, followed by his last hectic and triumphant twelve years in Rome, working for two Popes and their close associates.

Note: Raphael Sanzio da Urbino is in red, while Leonardo da Vinci, Donatello Bardi, and Michelangelo Buonarroti are in regular text. Raphael rapping along with another artist(s) is in red and italics. All four artists rapping at the same time are not in italics.]

Cowabunga, dude, so let's get it on.
Reptiles against the fathers of the Renaissance.
We got the classical technique
To kick these three-toed freaks back under the street! (Ooh!)
I take a turtle, and I turn him into mincemeat.
You don't really wanna step to da Vinci!
I love the ladies; I like to keep it mellow,
So let me pass the mic to my man, Donatello!
(Uh!) Hard shell, but you're gross in the middle.
Wouldn't wanna touch you with a six-foot chisel!
Born in goop, raised in poop,
I slice through a group of ninjas like fruit. Oops!
(Yo!) Raphael, and I came to flow!
Deemed dope by the Pope and I boned 'til I croaked!
I'm an emcee Shredder, but I get the feeling
I should pass it up to my man on the ceiling!
(Ohhh!) Michelangelo, and I'm a giant!
I made David, but I'll slay you like Goliath!
I'm a rap God, and you can't quite touch me!
This battle's your Last Judgment, trust me!
We drop science! We got the mathematics!
The architects of rebirth are rap addicts!
You beat the Foot, but it won't go well
When you catch an Italian boot to the half shell!

That's because you mutants are too immature!

You wouldn't know genius if it pissed in your sewer!

We got the talent, and the minds, and the rhymes so sweet!

We're like your NES game 'cause we can't be beat!