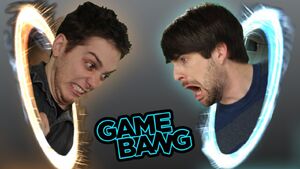 RAGING WITH PORTAL is the seventy-third installment of the Smosh Games series Smosh Game Bang.

It was uploaded on February 14th, 2014 on both smosh.com and YouTube.

Losing team will have to drink a "Science Concoction" which consists of lot of random things blended together into a drink.

Note: Team Lasershire was introduced as "the noob and the veteran" as Jovenshire was the only person who didn't play Portal games before.