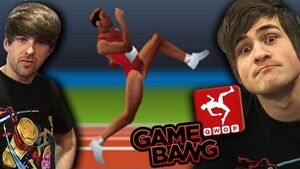 QWOP'ING LIKE AN OLYMPIAN is the seventeenth installment for the Smosh Games series Smosh Game Bang.

It was uploaded on January 18th, 2013 on both smosh.com and YouTube.

The gang try to get the farthest distance on QWOP.

The person with the shortest distance achieved would have to walk in the style of the QWOP athlete, controlled by the person who achieved the farthest distance.