If Superheroes Were Real!

Professor X (real name Charles Xavier) is a character based on the superhero of the same name. He debuted in 2011 and has been played by Ian Hecox and Damien Haas.

Professor Xavier is a character appearing in Marvel Comics. Created by Stan Lee and Jack Kirby, the character first appeared in The X-Men #1. The founder and often leader of the X-Men, Xavier is an exceptionally powerful telepath who can read and control the minds of others. To shelter and train mutants, he runs a private school in the X-Mansion in New York. Xavier also promotes peaceful coexistence and equality between humans and mutants in a world where zealous anti-mutant bigotry is widespread. Xavier is paraplegic and uses a modified wheelchair and is a scientific genius. Patrick Stewart played Xavier in seven films in the X-Men film series while James McAvoy plays a younger version of the character starting in the 2011 prequel X-Men: First Class. Both actors have since reprised their roles on multiple occasions.

If Superheroes Were Real!

A certain hippie is skeptical of Xavier's telepathic abilities and asks him to prove it. Xavier pretends to focus his power for a second before stating the hippie is a fan of the rock band AC/DC. The hippie is amazed, completely oblivious to his AC/DC shirt.

Title card in "If Superheroes Were Real!"

Title card in "IF MARVEL CHARACTERS WERE REAL" 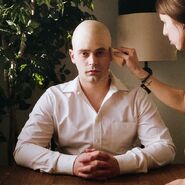 Retrieved from "https://smosh.fandom.com/wiki/Professor_X?oldid=160508"
Community content is available under CC-BY-SA unless otherwise noted.