Smosh Wiki
Register
Don't have an account?
Sign In
Advertisement
in: People, Females, Guests on SmoshCast,
and 2 more

WHY WE BROKE UP w/ Ian & His Ex-Girlfriend Pamela Horton

Pamela "Pam" Horton (b. May 4, 1988) is an American YouTuber, model, and former Playboy Playmate, and the former girlfriend of Smosh co-founder Ian Hecox. Ian and Pam started dating on September 11, 2015, after meeting for the first time at Playboy's SDCC SELF/LESS Party, an event that Pam invited Ian to. She has said that she invited Ian because of brand purpose on her personal channel. On April 8, 2016, Ian formally introduced Pamela as his girlfriend with an Instagram photo and descriptive caption, declaring her to be the love of his life.

In 2019, during the opening episode of SmoshCast, Ian indirectly revealed that he and Pam were no longer dating. Pam later appeared as a guest for the fourteenth episode, in which she and Ian officially confirmed that they had broken up, but that they were still good friends and hoped to remain that way.

Pam has sometimes been subject to fans berating her, either for "taking Ian away from Anthony" during his time on the channel, being with Ian in lieu of the fans being with Ian themselves, or even because she is not Ian's ex-girlfriend, Melanie Moat. This allegedly led to Ian making a textual Instagram post requesting that fans be kinder to the women in his life.

Ian and Pam at the SDCC Playboy Party in 2015 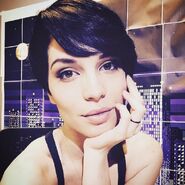 Pam in the thumbnail of SmoshCast's fourteenth episode
Community content is available under CC-BY-SA unless otherwise noted.
Advertisement