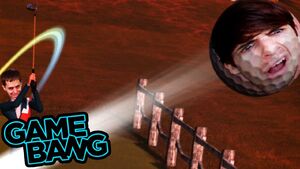 POWER STROKE THAT B*TCH! is the sixty-fifth installment of the Smosh Games series Smosh Game Bang.

It was uploaded on 20th December 2013 on both smosh.com and YouTube.

The Smosh Games crew play PowerStar Golf in two-player teams. To make the game more interesting, every player has to spin around 5 times before their turn.

One member of the losing team would become a human golf club and another would be the golf player swinging the club.

Retrieved from "https://smosh.fandom.com/wiki/POWER_STROKE_THAT_B*TCH!?oldid=175153"
Community content is available under CC-BY-SA unless otherwise noted.