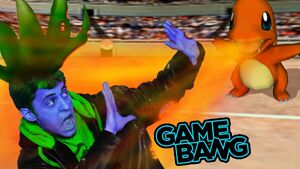 It was uploaded on 20th June 2014 on both smosh.com and YouTube.

The Smosh Games crew play another Pokemon match (best 3 out of 5), this time in the original Pokemon Stadium.

The losing team (the team to lose three times out of five) will act as Pokémon and the winning team will act as their trainers and act out a Pokémon battle.

Note: Pokémon in italic indicates that it was defeated during the battle.