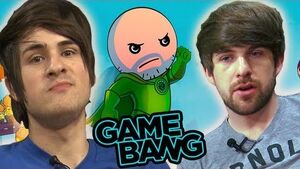 The Gang get together to play the theater mode on Cloudberry Kingdom.

The 2 teams that finish three courses with a combined time of over 5 minutes would have to partake in a three-legged race around the studio, duct-taped to their partner.