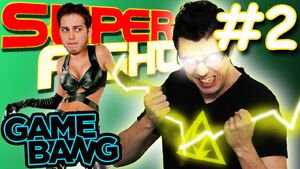 OUR SUPER FIGHT CONTINUES is the eighty-sixth installment of the Smosh Games series Smosh Game Bang. It is the continuation of the events of Let the Super Fight Begin!.

In the end, only people with 0 points were declared losers. Anthony and Lasercorn were on a date while Jovenshire combined two roles and became villain-waiter.