Smosh Wiki
Register
Don't have an account?
Sign In
Advertisement
in: Smosh videos, One Letter Off, Season 2019,
and 9 more

Grandson: "Ah! Nana! You're naked again!"
Nana Mongeau: "Aw, give me a hug! This is gonna be an amazing thumbnail!"
— Nana Mongeau flashing her grandsons for clickbait

ONE LETTER OFF YOUTUBERS is the 7th episode of the Smosh series One Letter Off. It was released on May 27, 2019.

What if your favorite YouTubers were just one letter off?

Punch that bell icon so you'll know when we add a new episode!

Nana Mongeau is in the process of filming another video, talking about how she is "f*cked up on blood thinners" and how her grandchildren are coming to visit. At that moment, her two grandsons (Shayne and Damien) walk in and greet her. Nana stands up to meet them, flashing her grandsons and inviting them to give her a hug, much to their disgust. Nana looks back at the camera with an eager face, knowing that the shot will make an "amazing" thumbnail.

"Barkiplier" is portrayed as a dog with headphones, with voiceover done in a comically deep voice that greets the viewers, introduces himself, imitates dog noises, and expresses a desire to cry.

On an episode of Good Mythical Morning, Rhett and Link prepare to compare cheese and expired milk right before the show would cut to the opening sequence. Link sneaks in a mention his foot fetish, causing Rhett to look at him in alarm.

Jeffree stabs a co-star (Damien). As he slumps to the ground, she shakes a bottle of perfume and sprays it on his face.

Gus imitates a bus, stopping at a bus stop with Courtney on his back and picks up Olivia. He walks away, making engine noises with his mouth. A late Shayne runs after them.

Olivia is at a gas station when a crook walks up to her and demands her purse. He pulls out Gus, carrying the comedian's body like a two-handed firearm, shooting bullets around Olivia (while Gus shouts "Bang! Bang! Bang!").

Keith is looking for some NyQuil and the store clerk points him to it, but warns that he will need to get through "her" first. The camera turns to show Safiya Nygaard holding a sword and shield in an aggressive stance, guarding the "Cold & Flu Medicine" section, and challenges Keith to try. Keith looks back at the clerk, who only shrugs.

Sean Evans is interviewing Gordon Ramsay while the two wear silly hats. Gordon is trying to concentrate on the interview but is increasingly distracted by the silliness of each new hat. Gordon eventually gives up and demands to be allowed to leave.

Shayne admires a pond aloud. Lele Pons corrects him, stating that she is Latina. 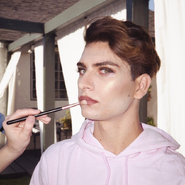 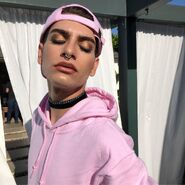 Another preview of Noah Grossman as James Charles[3] 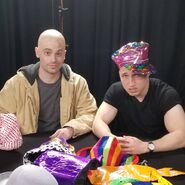 Preview of Damien Haas and Shayne Topp in "Hat Ones"[4]