Melanie Moat
Melanie Moat (born April 12, 1990) is Ian Hecox's ex-girlfriend. She and Ian first met through the Smosh forums, although they barely knew each other. In the summer of 2007, while visiting a friend in Sacramento, Melanie met Ian for the first time in person. The two hung out and "really hit it off." They began dating November 11, 2007. They were in a long distance relationship for a couple years, due to Melanie previously living in New Jersey as well as attending college, until she moved to Sacramento in early 2012 to live with Ian. She used to write articles for the Smosh website, however she stopped in 2010. Melanie has remained involved with Smosh's audience through social media platforms. They likely broke up on September 12, 2014, which Melanie annouced via Twitter that day, saying that it was something they both wanted and that it had been a great 7 years.

Melanie is in Boxman Loses the Election where she plays the girl at the beginning who gives Boxman the phone with Barack Obama on the line. She was the girl that tried to lick Ian's face in "MY NEW EMO HAIR! ". She was also sitting at the table in Ian Is Bored #2 and dancing at the beginning of Ian Is Bored #5. If you look closely in the "Boxman for President" video you can see her as the woman pushing the baby stroller. She is also featured in an older smosh video teaching you how to focus your video camera. Melanie is seen in various parts of Kalel Cullen's video blogs, such as "Ski Trip Extravanganza" and "DISNEY FUN! {Rewind Vlog #3}", though her long absence in WatchUsLiveAndStuff videos caused rumours that she and Kalel aren't friends anymore. Melanie appeared in AtomicMari's "100 QUESTIONS TAG!" video. She made her debut on Smosh Games channel in MariCraft video "Lasercornia Strikes Back".

Melanie now has a YouTube channel, called MostlyMelanie, where she planned to vlog about her daily life. However, she has a job in or around New Jersey, which has rendered her too busy for vlogging or making videos. Unlike Kalel Smith's channel, vlogs of Ian and her still remain on Melaine's channel with no plans of being removed.

Melanie enjoys art and photography. She has painted most of the wall art hanging in the Smosh House. Although many fans requested for Melanie to create a YouTube channel, she refused for a while, claiming she is "not funny on video". However, she made a vlogging channel in 2014, saying "I've never vlogged before, so this is going to be a learning experience. I'm really good at talking and that's what vlogging is all about." She has revealed on Twitter that she was peer pressured into making a vlog channel, but reassured that it was the "good kind of peer pressure." She also made the vlog channel to challenge herself. Melanie had grown popular among Smosh fans due to her sarcastic humor.

Note: Some facts may be outdated or untrue due to being communicated some time ago.

Melanie on her webcam 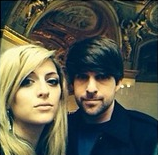 Ian and Melanie on vacation in France 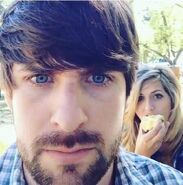 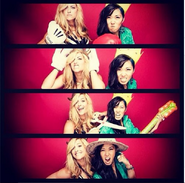 Mari and Melanie during Vidcon 2012

Ian in Melanie's vlog, "A HORSE WALKS INTO A VLOG." 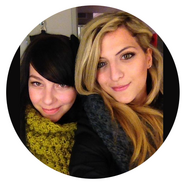 Melanie and her best friend, Corin.