Matthew Eric "Matt" Sohinki (b. August 29, 1987), mostly known simply as Sohinki, is an American YouTuber and a part-time cast member of Smosh. Before working for Smosh, he worked at both Mahalo Games and Clevver Games with Joshua Ovenshire and David "Lasercorn" Moss, who both joined Smosh Games with him in September 2012 when Clevver Games merged with Smosh. He is also known for doing stand-up comedy and gameplay videos on his personal YouTube channel.

On August 5, 2017, Sohinki announced that he and Lasercorn were no longer full-time Smosh Games members. They havd launched a gaming channel together named ToasterGhost, but it is currently inactive. Sohinki continued to make appearances in Smosh content in 2017 and 2018, with his last video appearance being JOVEN TAKES BOZE TO COURT. He was invited to take part in Smosh Summer Games 2019: Apocalypse but was on vacation at the time. He has since created content for his personal channel and streams on Twitch regularly.

On August 5, 2017, Sohinki released the video Sohinki's New Chapter (originally titled "Sohinki Not in Smosh Games anymore?"), in which he confirmed that he was no longer a full-time member of Smosh Games. He explained that he left because he felt it was time for him to move on as a creator. He also mentioned that he and Lasercorn would be creating a project together. The next day he, Lasercorn, YouTuber Amy Lynn (misshabit) and Pamela Horton, Ian's former girlfriend, created the channel ToasterGhost, which made regular videos up until late 2018.

Aside from their work for ToasterGhost and their own channels, both Sohinki and Lasercorn have continued to make occasional appearances on Smosh Games. However, Sohinki has appeared considerably less than Lasercorn since leaving and has notably not been present for many reunion-based videos (such as Smosh Summer Games and the 2018 and 2019 Halloween Just Dance tournaments.). As of 2019, the most recent Smosh video to feature Sohinki was the Smosh & Order episode "JOVEN TAKES BOZE TO COURT".

Here is a list of videos Sohinki has appeared in after he announced he was leaving Smosh Games. 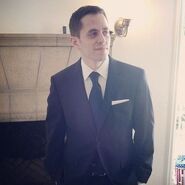