Matt Raub (born October 23, 1986) is an American director, producer, and writer. Currently, he is Vice President of Unscripted at Smosh. In the DEFY Media era, he was lead producer and director of Smosh Games. Along with managing talent, he was known for creating the series Cell Outs, as well as directing Honest Game Trailers, Game Bang and numerous other Smosh shows. Matt often appears in Family Style and Mystery Challenge.

During the interim after the Defy Media shutdown and Mythical Entertainment's acquisition of Smosh, Matt hosted a show called Cringe Party which where he and two guests would watch an infamously bad movie in order to commentate on it.

Following the return of Smosh under Mythical, Matt Raub was then given his higher position as a member of Senior Staff within the company. 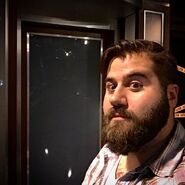