After Anthony and Ian find a "space rock", strange things start happening to their bodies or is it a space rock!?!

The following is the last known footage of Ian and Anthony:

In Anthony's room, Anthony records that three days after they found a space rock, he feels different and has got a rash on his arm. All of the sudden, Ian comes by to show Anthony something. Anthony brings the camera to show Ian's discovery.

In the living room, Ian takes an ordinary pencil and somehow bends it like a noodle as he waves it. Anthony wants to know how he's doing it which Ian doesn't know. He also shows that if he stops waving it, the pencil is stiff wanting to know how he's able to do it. Anthony gets freaked out thinking that ever since they touched the rock, they're turning into mutants which Ian starts to think that. All of the sudden, they heard a knock at the door. Anthony asked if it was another blow up doll that Ian ordered which it wasn't, but two men in black suits. One of them knocked off Anthony's camera from his hands making him pissed off. The first agent asked about Anthony witnessing something in the sky or someone picking up a large object from the field. Anthony and Ian said that they didn't wanting to know why. The second one said that they aren't allow to say and the first one gave them a card with their phone number to call them if they remember something and they left. Ian closed the door wanting to know what it was.

Two days later in Anthony's room, Anthony recorded that Ian's rash smells like Morgan Freeman's freckles as his spreads while showing his back with a rash that looks like a rocket. Ian came in thinking Anthony got a neat dick tramp stamp which Anthony questioned. Ian also asked about going to the doctors because the rash is getting to his private part. Anthony didn't feel like going there because he fears they'll lose their mutant powers. Ian knows the fact that they don't know about what they do. Anthony wanted to find out which Ian agreed.

Out in the park, Stevie records himself about being single wanting any pretty ladies, but Anthony told him to record Ian and Anthony with their mutant powers. Ian finds a man with a scooter to use their powers on. Anthony tried to use his powers, but he questioned about. After Ian told the guy about it, Anthony still try to his powers on the guy. The guy thought it was stupid, but when he got a brain freeze, Anthony thought he used his powers. Ian thought Anthony broke his brain. Anthony thinks he becomes stronger if his rash is bigger. When they see the guy running over an agent, they try to run away from the two. When Stevie fell down, Ian took the camera away from him not feeling like they can save him.

In the car, Anthony asks Ian if they're following them which Ian doesn't know while thinking they should've given them the rock back. Anthony doesn't want to while thinking about the good things that they'll do. Ian tells him to pay attention to the road, but they got into an accident.

At the doctors, Anthony tells the doctor about the last thing he remembered, but then saw Stevie at the doctors in the same room. Ian and Anthony didn't like it which Stevie talked about the agents beating him up and the doctors saying he has possible brain damage. Ian doesn't care and tells Stevie to take the camera. The doctor tells them that it was good for them to come because of getting a rare disease. Ian and Anthony thinks they're getting powers from it, but the doctor doesn't think that. Ian thinks that they're bad-ass mutants that can help people with their super powers which Anthony agreed with Ian. Ian and Anthony left thanking the doctor. Stevie asked the doctor if it's normal to fart blood which the doctor wanted him to get out.

In the house, Anthony told Stevie to record by the window. Ian shows the rash on his back spending in the form of a face asking if it was bad. When the door bell rang, Stevie decide to go get it. Anthony thought the rash looked like Morgan Freeman, but Ian thought it was Jennifer Lawerence. Stevie brought in the agents asking if they can be their friends, but Anthony and Ian started running away from them while carrying the camera to Ian's room.

In Ian's room, Anthony wants the both of them to eat the space rock to become unstoppable, but the agents came in wanting the rock. They wouldn't give it to him until the handicap agent said it was s**t. Anthony knows that it taste bad still thinking they'll get super powers, but the other agent told them it was actual s**t. Ian gets confused which the handicap agent told them that ever year, the international space station dumbs human waste and lands it on Earth which the agents have to find it before any idiots do. Anthony thinks they're joking which the other agent asked what they thought the brown stuff was. Anthony thought it was space chocolate and Ian wanted to know about their "mutant" rashes. The handicap agent said it was a very bad bacterial infection calling Ian a moron while the second agent asked what they've been doing with the poop. Ian and Anthony said they did nothing with it.

A few days ago, Ian and Anthony have been eating, partying with, pour soda at one hole and coming out of the other of, and throwing it.

Back in the present, Ian asked if they'll die which the agent standing up thought as a possibility. Anthony didn't care thinking Ian and him are mutants and nothing can stop them. However, the agent standing-up shocks Ian and Anthony with a taser and thought of leaving. However, the handicap agent asked about how they'll deal with Stevie. The standing-up agent thinks no one will listen to him, but will only look. As soon as they left, Stevie went to a mirror and talked to himself saying that it's alright and thinks of himself as sexy. He even asked Ian and Anthony, but they didn't response.

Later in the park, Stevie ate the whole s**t still thinking it's a space rock; he even went on the bottom of the slide because he thinks he can fly like Superman. As soon as he jumps off, he sings a song about him flying while thinking of him as a damn-sexy guy and having possible brain damage, but ends up falling on the wood chips. The camera goes off a few seconds later.

Anthony Padilla as Himself

Ian Hecox as Himself

Rafael Siegel and Jason Bortz as The Agents

Paula Barkley as The Doctor 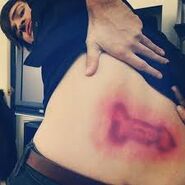 "Thanks for subscribing. Every subscriber guest been closer to getting rid of my rash on my private, on my private part place. Yea-Yeah, thanks man. Aaaaaw, you really----I got to get rid of this thing!"
—{{{2}}}