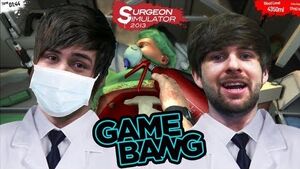 LIKE A SURGEON is the forty-eighth installment in the Smosh Games series Smosh Game Bang.

The Smosh Games crew try to do a heart transplant in Surgeon Simulator 2013.

Anyone that doesn't successfully perform the heart transplant has to eat a mix of hot dogs, tomato sauce, sour worms and sour gummy bears. (which was suppose to resemble "what they have to transplant")