LEAVE IT TO BIEBER

Leave It to Bieber

Charlie the Drunk Guinea Pig 2
LEAVE IT TO BIEBER is a Smosh video uploaded on April 30, 2010.

Brief Synopsis: Ian plays Justin Bieber in a parody of a 1950s sitcom, Leave It to Beaver.

Justin Bieber's dad, Carl (Anthony), comes home from work and asks his wife, Marie, what she did all day. Marie says that she did the laundry, but Bieber points out that she forgot to wash Checkers' clothes. The family dog Checkers was seen wearing clothes as a laugh track plays.

The family was eating dinner when Carl asks if his daughter Wendy cooked the meal. Marie says that she let Bieber cook dinner. After doing his signature hair flip, Bieber says that he'll be a chef when he grows up. However, Carl says the food tastes like s**t.

Carl was reading a newspaper when Bieber runs up to him, crying, which prompts him to ask what's wrong. Bieber told him that Wendy punched him before he did his signature hair flip. He then says that if Bieber told anyone, she would hit him again. Bieber ends up being punched by Wendy, which has Carl say, "No one likes a dirty rat, Bieber." A laugh track then plays.

Bieber starts to sit down on the couch with the family when Carl tells him that he'll start thinking that Bieber is a homosexual if he continues to spend time with Usher. Bieber then asks, "Hypothetically speaking, what if I was a homosexual?" Carl says that he'd disown Bieber. Everyone except Bieber laughs.

Bieber comes in with his report card and right when he tells Carl that he has it, Carl goes up and smacks Bieber, thinking that he got an F. Bieber cries that he got a B, making Carl apologize for the preempted punishment and suggests that Bieber hit him back. Bieber does so, which causes Carl to run away crying, making Bieber comment, "My dad's a pussy!"

Will Bieber ever earn the respect of his father?

Will Bieber ever hit puberty?

Find out next time on- The Leave It to Bieber show has been canceled!

Many Faces of Justin Bieber 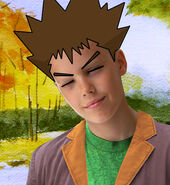 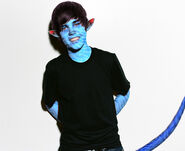