Joseph Daniel "Joe" Bereta (born November 13, 1982) is an American comedian and YouTuber who is half of the comedy duo Barats and Bereta. He was one of the top producers of Smosh. He is also well known for being one of the three original members of SourceFed (the other two being Elliot Morgan and Lee Newton).

Joe started working with Smosh in 2015, when he became producer and creative director of Every Blank Ever. He has acted in some Smosh videos including Every Teacher Ever, Guys Guide to Football and THE VLOG VIRUS (w/ Ryan Higa and Rhett & Link). He was also the host of Smosh Live. Bereta left Smosh in 2018 to work on The Valleyfolk but has since guest starred in some of Smosh's videos including SAFIYA NYGAARD ON YOU POSTED THAT! (w/ Olan Rogers & Joe Bereta). 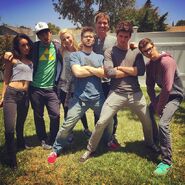 Joe (middle) with the Smosh cast and crew

Joe, around 2016
Community content is available under CC-BY-SA unless otherwise noted.
Advertisement