Jerry is a minor Smosh character. He is the main character in the video GAMER GETS TROLL'D! and serves as the main antagonist of the episode.

Jerry wears a gray shirt and a black jogging pants, his hair color is brown and he has a mustache and beard. He is usually seen wearing a Xbox Live headset.

Jerry is Anthony's cousin who is addicted to playing video games on his Xbox 360. Since he is staying with Ian and Anthony until he finds a job, Ian gets annoyed by him because whenever he want to use the TV, he is always there playing on his Xbox. Anthony also gets annoyed by him because he thought it was just a temporary living situation. Ian suggests killing him, which Anthony does not recommend Ian to do because Anthony said that his mom will be pissed. The duo attempted to troll Jerry 6 times, until when Ian and Anthony agreed to kill Jerry after seeing him in Ian's car. Viewers never find out if he is still alive. 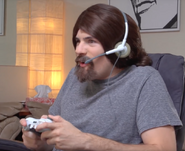 Add a photo to this gallery

Retrieved from "https://smosh.fandom.com/wiki/Jerry_Padilla?oldid=175033"
Community content is available under CC-BY-SA unless otherwise noted.