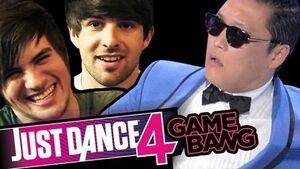 It was uploaded on 1st March 2013 on both smosh.com and YouTube.

The Smosh gang have a rematch and show off their skills in Just Dance 4 once more with new songs they've downloaded.

Like the 1st Just Dance Game Bang, the 2 people with the lowest scores will have to do a duet dance.

Note: The song highlighted in bold indicates it was the one song everyone knew was in the hat