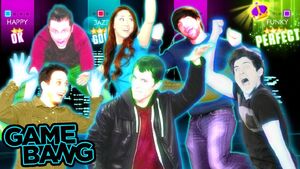 JUST DANCE LIKE NO ONE IS WATCHING is the eighty-fourth installment of the Smosh Games series Smosh Game Bang.

The Smosh Games crew have some fun with Just Dance Kids 2014.

Just like the other Dancing Game Bangs, the losers will have to do a duet dance.

Turn order and songs danced to