Whether it's Pennywise's untimely return, a highly-anticipated Frozen sequel, or Charlie's Angels, what would life be like if our favorite movies were real?

SMOSH IS GOING ON TOUR! Go to https://smosh.com/tour for tickets and more information! If this goes well, we may be able to go to even MORE cities!

A Message From Smosh

For completing the challenge to get Smosh to 25 million subscribers by the end of October 2019, Smosh has a big announcement: they are going on tour! Specifically, they will be taking their successful series on Smosh Pit, Try Not To Laugh Challenge, on the road and will even invite fans onstage to participate. Shayne, Ian, Courtney, and Damien list the locations throughout Washington, Oregon, California, and Arizona in February 2020. Tickets go live at 10 a.m. on November 1 on https://smosh.com/tour, but if you are subscribed to their email newsletter or text their phone number, you can get early access to tickets starting 10 a.m. on October 30.

The Joaquin Phoenix Joker (Damien Haas) from Joker (2019) is sitting alone in a dimly lit room and laments how society has turned its back on him because of his dark and twisted nature. He promises to be known as "the cruelest, most brutal, craziest villain of all time". Suddenly, the Jared Leto Joker (Shayne Topp) from Suicide Squad (2016) appears from behind to add "sexy!" to the resume and proceeds to try to remind the audience of his appearance only years earlier while provocatively dancing, much to 2019 Joker's confusion and dismay.

Pennywise (Ian Hecox) bursts through a door to greet his enemies Richie Tozier (Damien), Mike Hanlon (Rockerline Coleman), Beverly Marsh (Courtney Miller), and Eddie Kaspbrak (Shayne), now adults. Pennywise has returned after 27 years to ruin their lives, but he is silenced when they all scoff at him and bring up the challenges that come with adulthood, including mortgages, loans, taxes, back pain, and children of their own. A disheartened Pennywise offers his condolences and awkwardly leaves to target other children. After he leaves, Beverly continues a story that involved her showing up to another PTA meeting while drunk.

Shayne asks Damien to hand him his Gatorade from the office refrigerator. Damien opens the fridge and finds the Gatorade frozen solid, dramatically reacting with "Oh no! It's frozen!". Damien asks about his Capri Sun, which Damien finds to be "frozen also". Shayne asks if he means "frozen as well", to which the two, as well as Courtney (who is dressed as Elsa) all agree that Shayne's drinks are "very cold".

On Ahch-To, the Force ghost of Luke Skywalker (Damien) congratulates Rey (Courtney) for bringing balance to the Force once more, bringing an end to the Star Wars saga. Just then, Walt Disney appears, dressed in black robes, and reminds them that Star Wars is Disney's biggest cash cow, so they are going to continue "pop[ping] out that sweet cash milk out of your... Force udders". An annoyed Rey tells Disney that his metaphor is falling apart, which he pompously denies, since he is the resurrected "Walt Mu'fuggin' Disney" and blasts an air horn.

Jason (Ian Hecox) and his wife (Courtney) are walking through Upper West Side in New York City, which the wife regards as "the bad part of town", but Jason tries to assure her that they will be fine. Suddenly, a couple of Jets (Damien and Monica Vasandani) jump out and informs the couple that they are in Jets territory and they will be robbed. A trio of Sharks (Keith Leak Jr., Shayne, and Noah Grossman) appears from behind and tells the Jets that this is actually Sharks territory and tells them to leave.

Jason and his wife realize that they are in the middle of a turf war, but are confused when the gang members break out into a dance. As they leave, the gang members continue their dance until one of the Sharks, Eric, accidentally stab one of the Jets with his switchblade.

Don Lockwood is dancing around in the lane when the same Jets and Sharks members from the previous scene appear to join, but Eric accidentally stabs him. While the other gang members start to panic and berate Eric, he is kicked off the Sharks.

Two Disney executives, played by Shayne and Courtney, maniacally laugh as they relish in the success of Toy Story 4, as it drove kids to "pay for literal garbage" in the form of the character Forky. As their laughter falters, Courtney asks if they should be inviting other people to their meetings, but Shayne starts to feel betrayed, as if he is not enough for her.

Sabina Wilson (Courtney), Elena Houghlin (Kimmy Jimenez), and Jane Kano (Olivia Sui) are talking about how they are women and "super, badass" spies and how women can do anything. One of their friends, Louise (Monica), is with them and asks if she can do such things. The team explains to her that she would have to be under the age of 27 and adhere to unfair female body standards, have perfect hair and full-face makeup at all times, and have a sexy catchphrase that can be used anywhere. Charlie (voiced by Shayne) calls in and asks who their friend is. Louis introduces herself, including her love of plain oatmeal, which Charlie agrees is "tasty".

Spider-Man (Noah) jumps down from the roof and thanks Tony Stark for returning from the dead to mentor him. A Sony executive appears (Kimmy) and informs Spider-Man that he cannot legally mention anything relating to the Marvel Cinematic Universe. The Sony executive mentions that he can still talk about his aunt May and eggs him to admit that she is "hot". Peter wishes that he was still with Disney, prompting Walt Disney to appear again and promise to make Peter's apparent wish to "boink [his] aunt" come true, accompanied by another air horn.

Singin' in the Rain title card 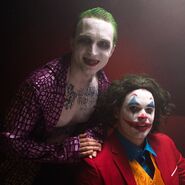