All Smosh channels; originally IanH
Ian Andrew Hecox (born November 30, 1987) is an American internet personality, actor, comedian, writer, director, and producer who is known for being the co-founder of the YouTube channel Smosh. He took over as the head of Smosh on June 14, 2017 after the other co-founder and creator of the original Smosh Productions, Anthony Padilla, left Smosh to be an independent content creator.

His mother Sharon has been featured in multiple Smosh videos and his father has only been seen twice (once in the behind the scenes video for Food Battle 2009, and then five years later in a Lunchtime with Smosh episode). Ian was in a relationship with Melanie Moat from 2007 to September 2014. On September 11, 2015 he started dating Playmate Pamela Horton. However, in the first episode of SmoshCast, Ian mentioned that he had celebrated his most recent Valentine's Day while single, indicating that he and Pam had separated - though exactly when and how they broke up is currently unknown.

He has blue eyes, dark brown hair, pale skin and a beard.

In an interview with PartnersProject, Ian mentioned that he was more of an outsider in high school and was kind of emotional. Later on, he joined Anthony's group of friends and he helped Anthony make Smosh.com.

During Anthony's time on the channel, Ian was often portrayed as dim-witted, ignorant, lazy, irritable, gullible, conceited, happy-go-lucky, and/or childish. He constantly demonstrated a lack of knowledge of the world. He was usually seen as less mature than Anthony, often going into temper tantrums or crying fits. Even though Ian was usually shown as intellectually inferior to Anthony, there have been instances where he had been expressed as smarter than Anthony: For example, in "Anthony is Mexican," Ian spoke fluent Spanish while Anthony could not, forcing the latter to rely on a dictionary (resulting in him saying "My donkey is river waffle big sausage fat."). Another example is shown when he clearly understands the instincts of surviving a horror movie much better than Anthony, and acts more seriously in the situation as shown in Molester Moon. But despite all of this, polls have shown that Ian's more popular amongst Smosh fans than any other character.

Ian had been shown to be even more into girls and their breasts/asses EXT. than Anthony. In the episode "MY MAGICAL TAPEWORM!", when Anthony grew breasts, he was completely upset about the situation. Ian however took advantage and played with the wonders that we call boobs on Anthony's chest, claiming that he has never felt "real ones before".

Furthermore, Ian is very offended by hand gestures as shown in the video, SUPER MARIO ODYSSEY AS A HORROR MOVIE. This shows that Ian also has a sensitive side.

During Anthony's time on the channel, Ian portrays most of the duplicating cast in the Smosh Productions in contrast to Anthony, as he has appeared as around 50 different duplicate persona's, for example Dr. Drew Peacock and George Zazz. As revealed in a Lunchtime with Smosh episode, when he's hungry, if he tries to say "animal," he'll say "mammal" instead. He also thinks that Jeeps are trucks for some unknown reason. In his Smosh Pit profile, he claims that he stands for truth, justice, and the "peanut butter cup way".

In an interview by New Media Rockstars in 2012, Ian mentioned that that his most caught Pokémon in the game was the Pidgey. In the same interview, he mentioned that his favorite guilty pleasure is using up all the gas in the car. He also mentioned that he used to be a runner and always wanted to run a marathon, but his parents would never let him because he was underage. Ian was a chubby kid when he was younger. In this interview, Ian mentioned that he has a huge phobia of bees. He was swinging on a swing when he was little at his aunt's backyard, not knowing that there was a wasp's hive there, he then confidently pushed it with the swing, making all the bees flee out and attack him.

As of October 30, 2013, Ian has a German Shepherd dog named Daisy. According to Ian, she is a SPCA rescue.

Ian made his official acting debut in Smosh: The Movie.

In The Angry Birds Movie he voices Bubbles, the Orange Balloon Bird.

Ian had progressively become more mature and responsible for the Smosh family as it grew, and it became apparent in his response to the Defy Media shutdown. Ian detailed the months that followed in the SmoshCast pilot:

Ian as Characterized in Smosh Videos

During Anthony's time on the channel, he had a dog named Sparky, he had an unnamed cat that went berserk in "Cat Soup," a lizard that got rabies in "LIZARD RABIES!", and a sister who was accidentally run over by Anthony in "Ian's Birthday." In an episode of Lunchtime with Smosh, he mentions that he has an older sister, though it is unknown if this sister was the one killed in Ian's Birthday or if she is a separate person. In an episode of Ian is Bored and Smosh, he claims he had a long lost brother named Adrian Hendrix, who died in a motorcycle accident, but this has yet to be proven real. His favorite food is pink-frosted sprinkled donuts. Although he is best friends with Anthony in real life and almost every Smosh video, they are both portrayed as mortal enemies in the Food Battle series. It is because Anthony thinks Ian's pink-frosted sprinkled donuts are useless, and he says that his taquitos, celeries, churros, burritos, red hot chili peppers, rainbow lollipops, egg rolls, giant gummy snakes, rock candies, chocolate-coated bananas, and vegan pink-frosted sprinkled donuts are much better.

Ian is shown to vary in being either more or less attractive to women than Anthony. He started an online blog to find someone who would date him, but every single one of the 30,698 votes declined. However, in the episode "5 Ways to Get a Girl," he was attracted by a girl who was sympathetic for him crying, but she was never seen again. In "Ian's First Girlfriend," Ian and Antoinette plan a wedding, but Anthony's hypnotism makes Ian lose his sentence, thus resulting in Antoinette breaking up with him. In "The Famous Cheese Guy," Anthony took a picture with a girl who enjoyed his cheese Melt-Down commercial, but when Ian moved in, the girl pushed him away and then spit on him. Ian's sexuality varies as well. In the episode "Smosh Snatchers," Anthony claims that the only guy Ian would go gay for is McGyver, but Ian states that he thinks every guy would go gay for McGyver. In "EVIL FORTUNE COOKIE!", he is given a fortune that says he and Anthony get married, so Ian asks Anthony to marry him. A disgusted Anthony refuses, telling Ian that he needs help, and walks away; in response, Ian starts crying and yells to Anthony that he would have divorced him anyway.

Ian also has a French cousin named Pierre, who appeared in the episode "I'M NOT RACIST!!!". Anthony thinks that Pierre is gay, when he really is not (although he does do some arguably gay things), as seen when he reacts disgustedly when he thinks Anthony is gay. Pierre seems to have the same level, if not, lower level of intelligence compared to Ian.

His family is more well known and more often seen than Anthony's family. Ian's mother Sharon is a recurring character in the videos, either as a caring mother to Ian or an antagonist ("XTREME SLEEPOVER!", "REAL DEATH NOTE!", and the alternate ending to "Breaking the Habit"). Ian's sister was killed off in "Ian's Birthday," but he was very happy about this, meaning that he hated his sister for some reason.

It is remarked by Kalel that Ian is actually allergic to cats when she lived in the Smosh house temporarily. However, in the WatchUsLiveAndStuff vlog "Chocolates in Bed," Ian is shown petting Pip with no reaction afterwards. It is currently unknown why this is.

Below is a presentation representing Ian's Family Tree made by Smosh.

(The following is the gallery of Ian's looks throughout the past)

Ian as a freshman in high school

Ian in 2008 (his hair was basically an intersection spike; this photo was done in the same year, but a slightly different hairstyle) 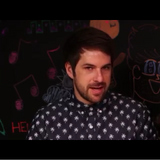