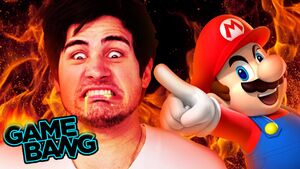 It was uploaded on October 10th, 2014 on both smosh.com and YouTube.

The Smosh Games crew play a round of chocolate roulette while playing Mario Party 9 mini-games, with one chocolate being covered in hot sauce.

As the challenge was based on everyone's luck, there was no declared winner, loser or punishment. In fact, every round there was a punishment for the unlucky player.