HEADS UP, WE SUCK! 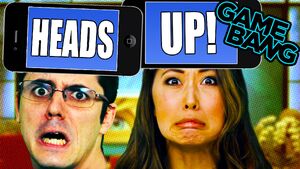 HEADS UP, WE SUCK! is the ninety-sixth installment of the Smosh Games series Smosh Game Bang.

The Smosh Games crew split into teams and test their trivial knowledge in Heads Up.

The lowest scoring team would have to do a headstand and be force-fed heads of lettuce.

Note: Jovencorn actually got 7 points in round 2, bringing their total up to 17 rather than 16, and Anthinki were stated to have 6 points as opposed to their real score of 5, both of these errors can probably be attributed to the person who was keeping track of the scores.