Guy Who Explains Every Joke (person)

This character, known as "guy who explains every joke" (portrayed by Ian Hecox), is a friend of Anthony. He is known for explaining about every single joke everyone says. His real name was never revealed.

He is generally seen wearing glasses and a backwards cap, a blue shirt and black plaid shirt and jeans.

His first appearance was in Step #4 of "How to Hide a B0ner in Public" but later he was in a deleted scene in Rejected Videos. In the first video, he greets Anthony and demands a handshake, but unfortunately gets bitten, and later when Anthony tells a joke, he says "That's what she said!" then laughs. In his second appearance, when Anthony tells a joke, he annoys Anthony by explaining the whole concept of the joke. Anthony becomes irritated and ends up shooting him. 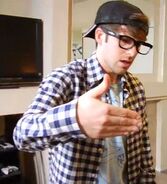 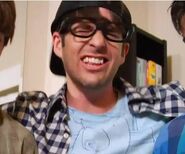 That what she said!!! 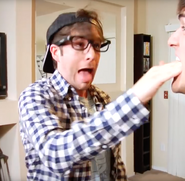 After insisting Anthony shake his hand, "guy who explains every joke" has his hand bitten, instead 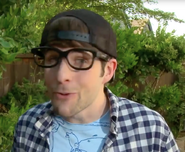