Smosh Wiki
Register
Don't have an account?
Sign In
Advertisement
in: People, YouTubers, The Slow Mo Guys, Guests on SmoshCast

The Slow Mo Guys
Gavin David "Gav" Free (born May 23, 1988) is an English producer, cinematographer, and internet personality. He is best known for his work at Rooster Teeth and, with his friend Daniel Gruchy, co-creating and co-hosting the web series The Slow Mo Guys. Gavin has appeared with Daniel on Smosh is Bored in 2015 and SmoshCast in 2019.

Gavin Free is an English actor, director, cinematographer, and Internet personality best known for his work at Rooster Teeth, where he formerly served as creative director and was featured in many of their projects, including the Achievement Hunter gaming division. He directed season 7 of Red vs. Blue, as well as its miniseries Relocated. Alongside his friend Daniel Gruchu, Gavin is also known as the creator and co-host of the web series The Slow Mo Guys, alongside his friend Daniel Gruchy, which features slow-motion footage of various stunts and experiments. In 2016, Gavin was nominated for a Webby Award in the Best Web Personality/Host (Online Film & Video) category for his work on The Slow Mo Guys. That same year, he won best in Cinematography at the 2016 Streamy Awards.

His acting roles include Woody in Lazer Team and its sequel, Vav in the animated comedy series X-Ray and Vav, and Scarlet David in RWBY. He is also known for his slow motion cinematography work for films, including Hot Fuzz (2007), Sherlock Holmes: A Game of Shadows (2011), Snow White and the Huntsman (2012), and Dredd (2012).

Gavin has been in a relationship with Internet personality and cosplayer Meg Turney since 2013. As of March 2019, he is now a permanent resident of the United States.[1] 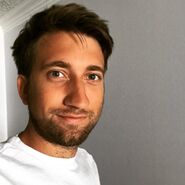