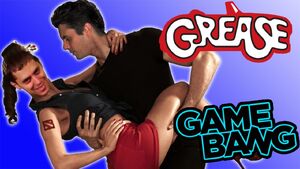 It was uploaded on December 6, 2013 on both smosh.com and YouTube.

The Smosh Games crew go all Greasy as they play Grease Dance for the Kinect.

The losers, once again, have to do a duet dance. In this case, one player wears Jovenshire's Elvis Presley inspired leather jacket and the other wears a small pink vest top

Retrieved from "https://smosh.fandom.com/wiki/GREASE_BANG?oldid=175157"
Community content is available under CC-BY-SA unless otherwise noted.