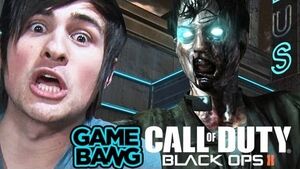 One person from the losing team has to do a lap dance to the other one while wearing a Jar Jar Binks mask.