"I would like to stab a man once."
—Felicia to Sohinki[src]

Kathryn Felicia Day (born June 28, 1979) is an American actress and writer known for her involvement in the web series The Guild and Dragon Age: Redemption and her involvement in the television series Buffy the Vampire Slayer and Supernatural. She has appeared as a guest star on Smosh Games in a 2013 episode of Gamer Nation and a two-part 2019 special of Gaming With A Twist.

Felicia Day is an American actress, writer, and web series creator. She is the creator, star, writer, and producer of the original web series The Guild (2007–2013), which revolves around the lives of an online guild, The Knights of Good, who play countless hours of a fantasy MMORPG referred to as The Game. Felicia also wrote and starred in the Dragon Age web series Dragon Age: Redemption (2011). Felicia was a member of the board of directors of the International Academy of Web Television December 2009 to July 2012.

In 2012, Felicia launched a premium YouTube channel, Geek & Sundry, which took over production of The Guild for Season 6. She hosts several shows on Geek & Sundry, most notably The Flog, Vaginal Fantasy, Felicia's Ark, and Co-Optitude (which co-stars her brother Ryon Day). On Geek & Sundry, Felicia created the web series Tabletop with Wil Wheaton, for which she is an executive producer and makes regular appearances as a guest. In the same vein, in 2015 she suggested to the original cast of Critical Role to begin streaming their tabletop home game as a show. In August 2014, Geek & Sundry was acquired by Legendary Entertainment to produce content alongside Chris Hardwick's Nerdist Industries, with Felicia retaining creative control.

On television, Felicia has played Vi in Buffy the Vampire Slayer and Dr. Holly Marten in Eureka, and had a recurring role as Charlie Bradbury on Supernatural. She has also acted in movies such as Bring It On Again (2004) and the Internet musical Dr. Horrible's Sing-Along Blog (2008). In April 2017, she began appearing as Kinga Forrester in Mystery Science Theater 3000.

In 2015, she released a memoir, You're Never Weird on the Internet (Almost). She released another book in 2019, Embrace Your Weird: A Guided Journal for Facing Your Fears and Unleashing Creativity.[1] 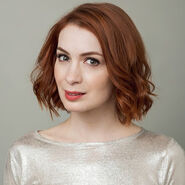 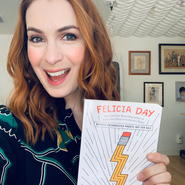 Retrieved from "https://smosh.fandom.com/wiki/Felicia_Day?oldid=177770"
Community content is available under CC-BY-SA unless otherwise noted.