Every Whole Foods Ever

Every Whole Foods Ever]

Courtney: "Yeah, but it's organic, non-GMO beans that have been harvested by a 120-year-old Sea Witch. It doesn't get better than that!"

Every Whole Foods Ever is a the 152nd episode of the Smosh series Every Blank Ever. It was released on January 13, 2020.

Get ready to spend your whole paycheck on groceries! This is EVERY WHOLE FOODS EVER!

A Sample of Kombucha

Damien approaches a clerk (Kimmy Jimenez) at Whole Foods Market that is manning a sample station and asks what she is doing. The associate explains that she is serving kombucha tea and offers a sample, which Damien accepts. After tasting it, Damien comments that it tastes like feet and throws the sample cup away. The associate cheerfully offers more, but Damien quickly declines and leaves.

A mother (Courtney Miller) turns into an aisle and picks up a bag of fruit snacks, commenting to her baby that they contain no high-fructose corn syrup and are made with natural colors. Another mother (Kimmy) in the aisle loudly remarks to her baby that they do not eat sugary snacks and grab roasted almonds instead, making brief eye contact with the other mother to challenge her. The first mother returns the fruit snacks to the shelf and grabs a box of plain oats, remarking that only a terrible mother would feed her children salt-covered almonds.

The two mothers progressively lose their composure, tossing grain crackers, bird seeds, and "organic snack dirt" into their carts before abandoning their charade of a fight altogether and ram their carts into each other like chariots. This, however, only serves to upset their babies, leading to the mothers to stop their fighting to pick up and calm their babies down before they leave to find the store's manager.

Courtney mentions to Ian that she cannot believe that he has never shopped at Whole Foods before since everything is cheap. A doubtful Ian reads to Courtney the price of a single can of beans ($12), but Courtney explains that the beans are organic and non-GMO and were harvested by a Sea Witch (Damien Haas). Courtney also offers the store brand, which is $8 but lacks the sea witch in its production. Ian considers its price a "steal" by comparison but admits that he "wants that Sea Witch" and grabs the organic beans. Courtney agrees that it is "always worth the Sea Witch", prompting the Sea Witch (Damien Haas) to appear next to them to cackle.

A couple (Damien and Courtney) mentions that they return to Whole Foods Market on their anniversary and recount the story of how they met: Three years ago, they met in the essential oils aisle. They were both looking for lavender oil; her, for a headache, and he, for a rash. There was only one bottle left, "and the rest was history". The clerk (Ian) ringing them up, visibly amazed, remarks that he could never grow tired of listening to their story and the customers behind the couple in line clap in applause. Encouraged, the couple recounts the story of how they met again, causing the clerk to tear up as he listens.

A pretentious upper-class customer (Ian) approaches a clerk (Kimmy) and addresses her as "worker man". Dismissing her correction that she is a woman, he explains that he is trying to find truffles for a "tyliatalianiocinta" with pork sausage and "black truff-fel". The clerk points him in the direction of the truffles, visibly confused by the customer's mannerisms. On the way to the produce section, the customer finds a platter of free pizza. Losing all composure, he drops his basket of groceries and proceeds to grabs as much pizza as he can while stuffing his mouth and runs off.

A single box of pasta is rung up as $132.19, but the hippy (Damien) buying it is able to buy it up with his "black card"; a carton of chicken broth is rung up as $246.17, but the rich older woman (Courtney) buying it is able to write a check from her trust fund to pay for it; a can of non-GMO beans "with extra Sea Witch" is rung up to $811.70, but the steampunk gentleman (Ryan Todd) buying it is able to make the purchase with gold bars. At that moment, Kimmy interrupts and asks the clerk (Ian) if the store carries any Cheetos. After several seconds of confused sputtering, the clerk says no. He and the steampunk gentleman agree that her question was "rather odd".

A few seconds later, Kimmy returns with a bottle of deodorant in her hand and asks if it is "real". The gentleman simply smacks it out of her hand.

Courtney returns to the Smosh Office with a bag of healthy groceries from Whole Foods, namely cheese puffs, pork rinds, gummy bears, and cupcakes. Olivia tells her that none of these are healthy, but Courtney mentions that the food are from Whole Foods. After a few moments of silence, Olivia agrees, and the two proceed to vehemently inhale the cupcakes.

Title card
Add a photo to this gallery 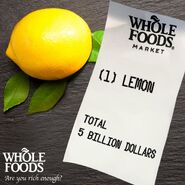 Preview of the subject of the video[1] 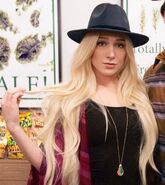 A preview of Courtney as an essential oils-using customer[2] 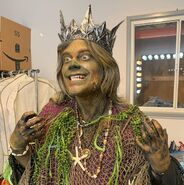 A preview of Damien as the Sea Witch[3]

Retrieved from "https://smosh.fandom.com/wiki/Every_Whole_Foods_Ever?oldid=180733"
Community content is available under CC-BY-SA unless otherwise noted.