Smosh Wiki
Register
Don't have an account?
Sign In
Advertisement
in: Articles in need of citation, Articles to be expanded, Articles missing credits,
and 10 more

bozey bozington
Ericka "Boze" Bozeman (born February 4, 1992) is a Twitch streamer and former member of Smosh Games. Her first appearance was on Courtney and Olivia's Smosh Pit series, Seriously Super Stupid Sleepover, in the episode BUCKET OF DOOM W/ FLITZ AND BOZE. She was formally introduced as a cast member in Smosh Winter Games 2017 and made her first main channel appearance in EVERY SLEEPOVER EVER.

During its run, Boze was the host of Smosh Games Live, in which different Smosh Games members played games with her live on YouTube. She appeared on numerous episodes of Board AF and Game Bang, as well as a few episodes of The Show w/ No Name. She was also featured in an episode of Put It in My Mouth, specifically GROSS ICE CREAM SPEED DATING. In 2018, Boze hosted and played multiple roles on Smosh & Order, a parody court drama series on Smosh Games. A couple of months after Defy Media shut down, Boze announced that she was leaving both Smosh and her online career to focus on alternative endeavours.

On January 12, 2019, Boze confirmed on Twitter that she was stepping away from her internet career (indirectly confirming that she would not return to Smosh Games), and had taken a job in marketing. While she entered a company as a digital marketing manager, within two months she had been made the head of her department.[2]

It was later revealed on Genius Brain's Podcast that while filming Thank You To The Viewers!, she realized that she was not as driven as her fellow cast members in pursuing her current career as an entertainer. She decided to try to side step to marketing, as she felt that someone else who truly wants what she has deserves the success of being an entertainer. However, marketing had not gone well so she opted to try production instead, with Boze creating Smosh & Order as a part of this process, and it was implied that had Defy Media not closed, she would have stayed with Smosh for another year to continue building up her resume. Boze also revealed that she never felt truly accepted by the Smosh Games Crew, and that since the closing of Defy Media she has had minimal contact with the cast and crew of Smosh as a whole. However, in 2020, she has appeared in a few videos on the The Jovenshire channel and Boze has confirmed she has kept in contact with the Smosh Games Crew, but not so much the Smosh Squad. She also marketed the Try Not To Laugh Live! in 2020.

Since then, she has publicly declared that she disliked the way Matt Raub treated her, but iterated that she still supports the rest of the Smosh cast.

As of June 2020, she has made public that she manages Mia Khalifa- a social media personality, sports commentator, webcam model, and former pornographic actress.

Boze in 'BOZE BECOMES ONE WITH THE CATS'

As introduced in Smosh Winter Games 2017 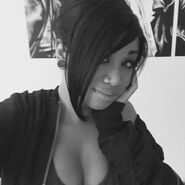 Boze with Damien in '$300 BOSTON ADVENTURE'

Boze in 'EVERY APPLE STORE EVER' 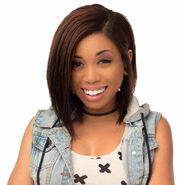