Smosh Wiki
Register
Don't have an account?
Sign In
Advertisement
in: Smosh videos, Every Blank Ever, Season 2019,
and 6 more

"America asked and we delivered. Y'all liked how crispy our Extra Crispy chicken is, so we're bringin' ya somethin' new: The Crispy Fried Batter Bucket!"
—Colonel Sanders

EVERY KFC EVER is the 135th episode of the Smosh series Every Blank Ever. It was released on July 22, 2019.

Take a questionable Colonel, throw in eleven herbs & spices and you've got a chicken recipe that's somehow incredibly greasy, but still finger lickin' good. This is EVERY KFC EVER! 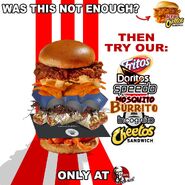 Preview of Ian as Colonel Sanders[3]

Preview of Courtney and Kimmy as KFC employees[3]

Preview of Damien as a KFC employee[3]

Preview of Courtney as Colonel Sanders[3] 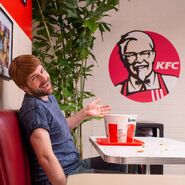 Preview of Ian as a KFC customer[4] 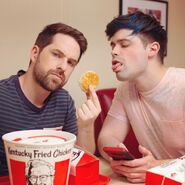 Ian and Damien as KFC customers[5] 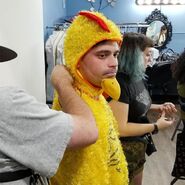 Behind the scenes preview of Damien as a chicken inmate[6]