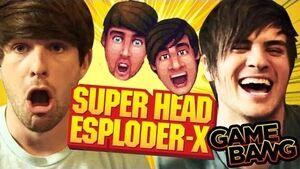 ESPLODIN'S SOME HEAD!!!!! is the twenty-second installment of the Smosh Games series Smosh Game Bang.

It was uploaded on February 22, 2013 on both smosh.com and YouTube.

The Smosh Games crew play one of Smosh's own games, Super Head Esploder-X.

Whoever gets the least amount of coins would have to eat a grape which had spontaneously combusted in the microwave.

Note: Anthony mistakenly put Jovenshire's score as 2,933 when he was typing it, leading him to mistakingly think he was in 5th place after Lasercorn's turn and during the score announcement.